by Cherlynn Low
in Technology News

Google is ready to add more features to the public preview of its upcoming platform as it gets closer to being ready for its proper launch. The company announced that it’s pushing out the third beta of Android 12 today, and it brings features like scrolling screenshots, enhanced auto-rotate and more. For developers, Google said this is the “last beta release before the Platform Stability milestone,” which means they can begin to test their apps for the next platform. Beta 3 will also include the final Android 12 APIs and official SDK.

Those may not seem obviously impactful for the average user. What will feel more immediately useful are scrolling screenshots, which Google said will work “out-of-the-box for most apps.” With Beta 3, when you snap an image of your screen, you’ll see a new “Capture more” button. Tap that, and you’ll extend the boundaries of your screenshot to get all the content available, after which you can adjust the crop. Google said it’s “continuing to iterate on scrolling screenshots” and “also working to provide support for a wider variety of content (such as web content),” so it’s possible this version isn’t what you’ll see when Android 12 officially launches. 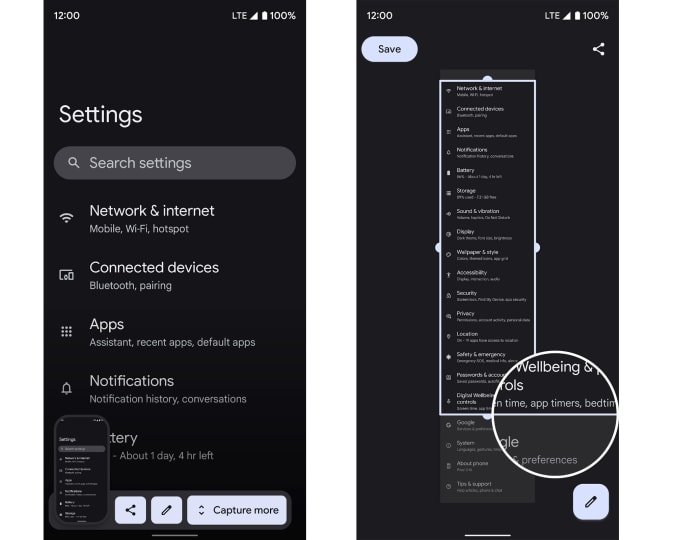 Beta 3 also brings enhanced auto-rotate, which will use your phone’s front camera to detect your face and tell when you’ve flipped the device. As opposed to relying only on accelerometers/gyroscopes to detect the orientation of your phone, this can make auto-rotate more responsive. It’s “especially helpful for people who are using their devices while lying down on a couch or in bed, for example,” Google said. If you don’t like the idea of your camera being used to see how you’re holding up your phone, it may help to know that the company said the feature lives in its Private Compute Core and the “images are never stored or sent off the device.” Enhanced auto-rotate will be available on the Pixel 4 and newer Pixel devices.

If you’re on an older or non-Pixel phone, you’ll also see some improvements. Google said it “optimized the animation and redrawing and added an ML-driven gesture-detection algorithm” that’s reduced the base auto-rotate feature’s latency by 25 percent.

Another new feature on Beta 3 is platform support for Google’s on-device search engine called AppSearch. It’ll allow developers to offer better search tools in their apps, and also offer them the option of participating in a central index “that’s maintained for the entire system in Android 12 (and later releases).” Those who opt-in to the central index will enable Google to show data from their apps in overall system searches. Developers can also choose to “securely share data with other apps, allowing them to search your app’s data as well as their own.” That means one day, if they decide to enable it, apps like Tinder and Spotify could search data within your Facebook, Twitter or Instagram apps, for example.

That function is not here yet since it requires developer participation. Many other features on Beta 3 are also behind-the-scenes, like the new ability for enterprises to set camera and mic restrictions on devices they manage. Android 12’s Game Mode APIs will let developers respond appropriately to different profiles selected by the player, “like better battery life for a long commute, or performance mode to get peak frame rates,” for example. These will be part of an “upcoming game dashboard which provides an overlay experience with quick access to key utilities during gameplay” that will be available on select devices later this year.

We’re still eagerly awaiting the addition of the Material You design scheme that Google unveiled at I/O earlier this year, but as Android 12 approaches platform stability and a final release, it looks like most of the features we were expecting are here. If you’re eager to test out this preview and can’t wait for the official launch, you can enroll in Google’s beta program. As always, we must caution that preview software is not guaranteed to be stable and you should back up your data before installing the beta. Whether you check out this early build or wait for a little longer, it does seem like a meaty update is coming for Android users that could be worth the anticipation.