by Andrew Tarantola
in Technology News

The nature of war continues to evolve through the 21st century with conflict zones shifting from jungles and deserts to coastal cities. Not to mention the rapidly increasing commercial availability of cutting-edge technologies including UAVs and wireless communications. To help the Marine Corps best prepare for these increased complexities and challenges, the Department of Defense tasked DARPA with developing a digital training and operations planning tool. The result is the Prototype Resilient Operations Testbed for Expeditionary Urban Scenarios (PROTEUS) system, a real-time strategy simulator for urban-littoral warfare.

When the PROTEUS program first began in 2017, “there was a big push across DARPA under what we call a sustainment focus area, and that included urban warfare,” Dr. Tim Grayson, director of DARPA’s Strategic Technology Office, told Engadget, looking at how to best support and “sustain” US fighting forces in various combat situations until they can finish their mission. 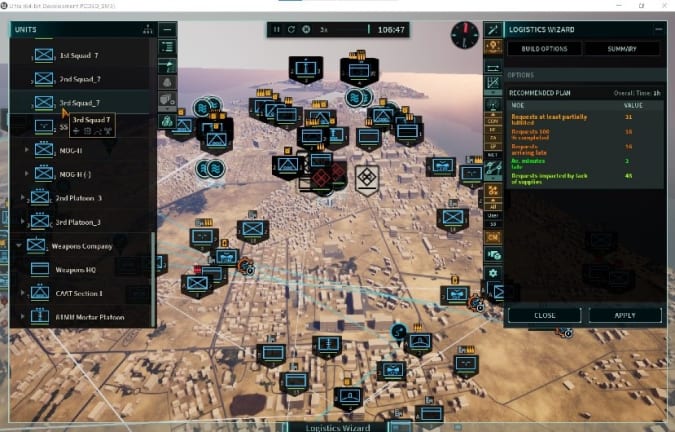 The PROTEUS program manager (who has since departed DARPA), Dr. John S Paschkewitz, “came to the realization that the urban environment is really complex, both from a maneuver perspective,” Grayson said, “but also going into the future where there’s all this commercial technology that will involve communications and spectrum stuff, maybe even robotics and things of that nature.”

Even without the threat of armed UAVs and autonomous killbots, modern urban conflict zones pose a number of challenges including limited lines of sight and dense, pervasive civilian populations. “​​There’s such a wide range of missions that happen in urban environments,” Grayson said. “A lot of it is almost like peacekeeping, stabilization operations. How do we… help the local populace and protect them.” He also notes that the military is often called in to assist with both national emergencies and natural disasters, which pose the same issues albeit without nearly as much shooting.

“So, if someone like the Marines or some other kind of sustainment military unit had to go conduct operations in a complex urban environment,” he continued, “it’d be a limited footprint. So, [Paschkewitz] started looking at what we refer to as the ‘what do I put in the rucksack problem.’”

“The urban fight is about delivering precise effects and adapting faster than the adversary in an uncertain, increasingly complex environment,” Paschkewitz said in a DARPA release from June. “For US forces to maintain a distinct advantage in urban coastal combat scenarios, we need agile, flexible task organizations able to create surprise and exploit advantages by combining effects across operational domains.”

PROTEUS itself is a software program designed to run on a tablet or hardened PDA and allow anyone from a squad leader up to a company commander to monitor and adjust the “composition of battlefield elements — including dismounted forces, vehicles, unmanned aerial vehicles (UAVs), manned aircraft and other available assets,” according to the release. “Through PROTEUS, we aim to amplify the initiative and decision-making capabilities of NCOs and junior officers at the platoon and squad level, as well as field-grade officers, commanding expeditionary landing teams, for example, by giving them new tools to compose tailored force packages not just before the mission, but during the mission as it unfolds.”

But PROTEUS isn’t just for monitoring and redeploying forces, it also serves as a real-time strategy training system to help NCOs and officers test and analyze different capabilities and tactics virtually. “One of the beauties of [PROTEUS] is it’s flexible enough to program with whatever you want,” Grayson said. It allows warfighters to “go explore their own ideas, their own structure concepts, their own tactics. They’re totally free to use it just as an open-ended experimentation, mission rehearsal or even training type of tool.”

But for its design flexibility, the system’s physics engine closely conforms to the real-world behaviors and tolerances of existing military equipment as well as commercial drones, cellular, satellite and Wi-Fi communications, sensors and even weapons systems. “The simulation environment is sophisticated but doesn’t let them do things that are not physically realizable,” Grayson explained.

The system also includes a dynamic composition engine called COMPOSER which not only automate the team’s equipment loadout but can also look at a commander’s plan and provide feedback on multiple aspects including “electromagnetic signature risk, assignment of communications assets to specific units and automatic configuration of tactical networks,” according to a DARPA press release. 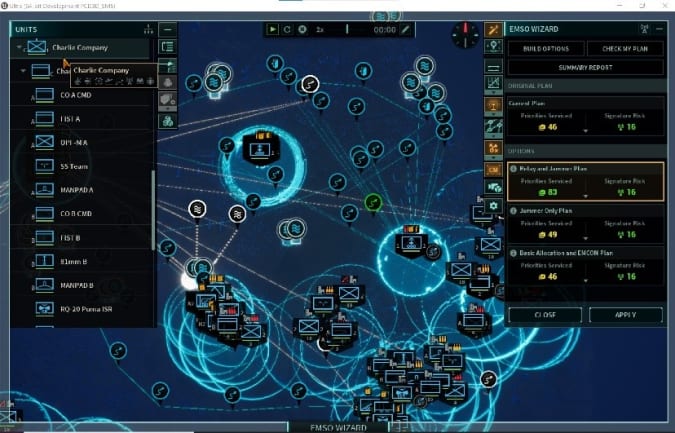 “Without the EMSO and logistics wizards, it’s hard to effectively coordinate and execute multi-domain operations,” Paschkewitz said. “Marines can easily coordinate direct and indirect fires, but coordinating those with spectrum operations while ensuring logistical support without staff is challenging. These tools allow Marines to focus on the art of war, and the automation handles the science of war.”

Currently, the system is set up for standard Red vs Blue fights between opposing human forces though Grayzon does not expect PROTEUS to be upgraded to the point that humans will be able to compete against the CPU and even less likely that we’ll see CPU vs CPU — given our current computational and processing capabilities. He does note that the Constructive Machine-learning Battles with Adversary Tactics (COMBAT) program, which is still underway at DARPA, is working to develop “models of Red Force brigade behaviors that challenge and adapt to Blue Forces in simulation experiments.”

“Building a commander’s insight and judgment is driven by the fact that there’s a live opponent,” Paschkewitz said in June. “We built ULTRA [the sandbox module that serves as the basis for the larger system] around that concept from day one. This is not AI versus AI, or human versus AI, rather there is always a Marine against an ADFOR (adversary force), that’s another Marine, typically, forcing the commander to adapt tactics, techniques, and procedures (TTPs) and innovate at mission speed.”

“PROTEUS enables commanders to immerse themselves in a future conflict where they can deploy capabilities against a realistic adversary,” Ryan Reeder, model and simulation director, MCWL Experiment Division, said in a statement. “Commanders can hone their battlefield skills, while also training subordinates on employment techniques, delivering a cohesive unit able to execute in a more effective manner.

Technically, DARPA’s involvement with the PROTEUS program has come to an end following its transfer to the Marine Corps Warfighting Lab where it is now being used for ADFOR training and developing new TTPs and CONOPS. “My guess is they will mostly use it for their own purposes, as opposed to continuing to develop it,” Grayson said. “The Warfighting Lab is less focused on technology and more focused on our future force, concepts and what are our new tactics.”

Why use virtual desktops? 5 practical reasons from real-world users

A broker reacts while trading at his computer terminal at a stock brokerage firm in Mumbai, India, February 26, 2016....

With new iPhones come new features. And starting next week, Apple HomeKit users will get plenty courtesy of iOS 15,...